About the Ni‘ihau Cultural Heritage Foundation 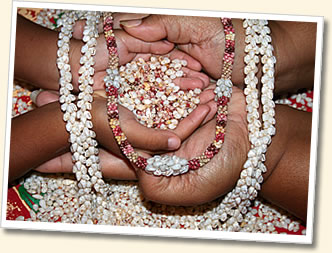 Job opportunities continued to decline on the island of Ni‘ihau. More and more families were leaving the island, with most moving to Kaua‘i. To help the community deal with this situation, a grant was obtained from the Office of Hawaiian Affairs (OHA) in 2005 to assist the people of Ni‘ihau in retaining their culture and language as well as in developing economic self-sufficiency.

At a series of community meetings held on Kaua‘i, 21 extended-family groups were identified as being involved to at least some extent in making Ni‘ihau shell lei. Of these groups, 18 families selected representatives to be involved in the process of setting up a nonprofit support organization.

In January 2006, Ni‘ihau Cultural Heritage Foundation (NCHF) was granted tax-exempt status as a 501(c)(3) organization by the Internal Revenue Service. 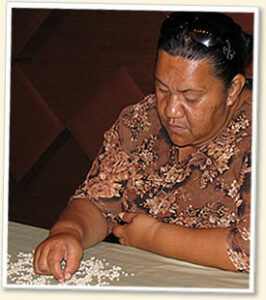 As a newly-formed nonprofit organization, NCHF was able to apply directly for another OHA grant, and partial funding from this grant was used to set up this website. One purpose of the website is to help build the brand name of the Ni‘ihau shell lei by educating the public on the history and true value of this fine folk art which has been a part of the unique Ni‘ihau culture for at least two centuries, probably much longer.

Part of the mission of NCHF is to make potential customers aware of where Ni‘ihau shell lei can be purchased.  All of these retail outlets benefit the shell lei makers because they make their artwork available to the general public. The only disadvantage is that a significant percentage of the purchase price goes to someone other than the artisans themselves. Some families are regular participants in craft fairs or at the Merrie Monarch Festival in Hilo, and a few have also learned how to make their shell jewelry available on the Internet; most artisans, however, have not tapped into these means of more direct sale to the public.