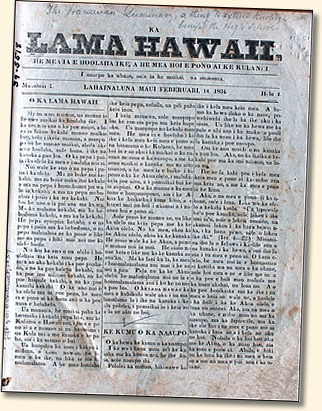 Hawaiian had a rich legacy of oral literary tradition when the first Westerners arrived in the latter part of the 18th Century. Following the arrival of the first American missionaries in 1820, Hawaiian also established an impressive tradition as a written language.

One of the most literate nations in the world…

During the 1800s, Hawai‘i became one of the most literate nations in the world with over 90% of the population able to read and write. Even King Kamehameha III proudly declared, “He aupuni palapala ko‘u” (“I have a kingdom of education”).

In February 1834, the initial edition of Ka Lama Hawaii was the first newspaper to be printed west of the Rocky Mountains. Eventually, there were over 100 different Hawaiian-language newspapers in print. Copies of old newspapers still exist, and many are available on the Internet at sites such as http://nupepa.org/.

Overthrow of Queen Lili‘uokalani and the Hawaiian monarchy, establishment of the Republic of Hawai‘i, and annexation of the Republic to the United States in the late 1800s proved to be the beginning of the end of the dominance of the Hawaiian language in its own homeland.

Use of Hawaiian Language Declines

The Hawaiian-medium school system was abolished in 1896. Use of Hawaiian in territorial schools was forbidden in 1898, and children were summarily punished for speaking Hawaiian in school.

Thus the fate of the Hawaiian language followed the same pattern as that of indigenous languages throughout the world. Once parents succumb to the belief that the only way to get ahead in the modern world is to forsake their native language and not teach it to their children, it takes only one generation for a language to begin traveling down the path to linguistic extinction.

But what happened to the Hawaiian language on the isolated, privately-owned island of Ni‘ihau during all this time? 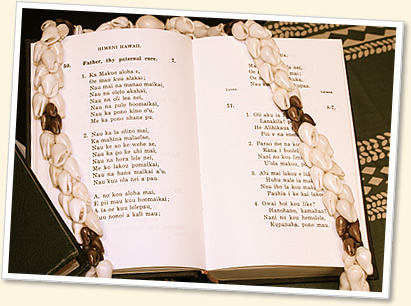 Ni‘ihau not only escaped the near extinction of the Hawaiian language that occurred on the other islands, but its isolation also resulted in the evolution of a separate dialect. Today this is the only community that continues to use Hawaiian as the language of the home as it has done since antiquity.

However, as the population of the island of Ni‘ihau decreases, the influence of the dominant English-language culture on those of the community who now live mostly or even full time on Kaua‘i or other islands is taking its toll.

Everyone who continues to live on Ni‘ihau today, or adults who grew up on Ni‘ihau before moving away from the island, are fluent speakers of the Ni‘ihau dialect, but Ni‘ihau children who have been born and raised “outside” are losing the depth of knowledge in the language of their parents and grandparents.

Then, as members of this new generation grow up and begin families of their own, the gap in language fluency continues to grow.

Yet the Hawaiian language is still alive among the Ni‘ihau community, and it also continues to be considered a unique dialect. Unfortunately, most people never have the opportunity to hear the Ni‘ihau dialect being spoken.