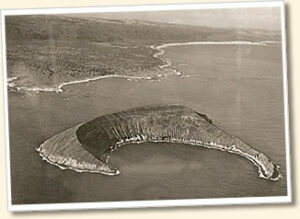 An aerial view of Ni‘ihau and Lehua…

Traditional Hawaiian chants offer several different legends about the formation of the island of Ni‘ihau, but most agree that when Pele, the volcano goddess, came to Hawai‘i, her first home was on Ni‘ihau. She continued to move down the chain of islands to her current home on the island of Hawai‘i, an ancient chronology of events generally supported by modern science although there is geological evidence that Ni‘ihau was formed by a secondary vent after the Kaua‘i volcano began erupting. 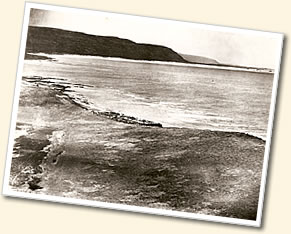 After the islands were inhabited by the early Polynesians who voyaged countless miles across the vast Pacific ocean, Kahelelani became the first great ali‘i (chief) of the island of Ni‘ihau. Until today the island is often called Ni‘ihau a Kahelelani, and his name is also used for the famous kahelelani shells which are used in making Ni‘ihau shell lei.

Another beloved ali‘i in the history of Ni‘ihau was Kā‘eo who was responsible for uniting the island after defeating the warlike Kawaihoa. Kawaihoa was banished to the southern point of the island. His name was given to the hill on the southern end of the island which is usually visible from West Kaua‘i and sometimes mistaken for a separate island.

Kā‘eo married a high chiefess named Kamakahelei, and their son Kaumuali‘i was born in 1790. Kaumuali‘i later became king of both Kaua‘i and Ni‘ihau, and the story of how the islands of Kaua‘i and Ni‘ihau were the last islands to be united under Kamehameha is another bit of history that exemplifies the independence of these two islands. “Ni‘ihau i ke kīkū” is a traditional saying that also describes the independent nature of the people of Ni‘ihau.

“However, 1863 marked the advent of a series of events which was to have lasting influence on the history of Ni‘ihau and her people until this very day.” 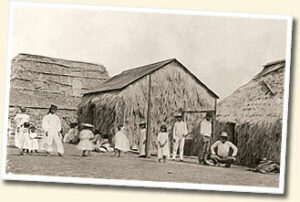 A final purchase price of $10,000 was agreed upon, but Kamehameha IV died on November 30, so Royal Patent No. 2944 shows his brother, Kamehameha V, completed the transaction on January 23, 1864, giving fee simple title to James McHutchison Sinclair and Francis Sinclair for all the government lands on Ni‘ihau. These “government lands” did not include two large parcels of land set off for Koakanu during the Great Māhele in 1848 and a tract of land containing 50 acres previously sold to Papapa.

Papapa apparently agreed to sell his acreage to the Sinclairs without incident, but it seems Koakanu refused to allow anyone to cross any portion of his land and even forbade boats to come in closer than one-half mile off the shoreline of his property.  The story goes that it was his wife who finally convinced him to accept an offer of $1,000 (or $800 according to other records) for his lands. 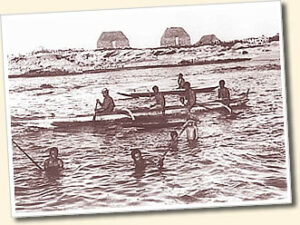 During the 1800s, the traditional lifestyle of the Ni‘ihau people was generally similar to that on the other islands, particularly in the rural areas. The grass house was the standard residence, and fishing was a primary source of food. Because of the arid climate, however, yams, sweet potatoes, and breadfruit mostly replaced taro and fruits which have always been abundant on the other islands which have adequate rainfall.

However, the yams from Ni‘ihau, called uhi, were highly favored by whalers who stopped there for provisions because these yams lasted longer than sweet potatoes or taro and were a good source of vitamin C, which helped to prevent scurvy. These giant uhi were once described as being so heavy that a horse could carry no more than two at a time.

PHOTO: Fishermen in canoes off the shore of Ni‘ihau 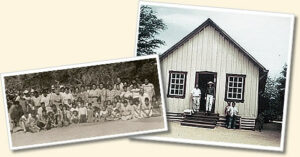 Ni‘ihau, a Heritage of Island Artisans

Ni‘ihau was also known for crafting the finest makaloa mats in Hawai‘i made from a perennial sedge that grew abundantly on the island. Geometric pāwehe motifs were used to decorate the mats and were also used on gourds whose designs were prepared in a special way never used on any of the other islands.

PHOTOS:
1)  Ni‘ihau children during summer school on Ni‘ihau in 1966.
2)  Mr. Gabriel I visiting Ni‘ihau (date unknown) at one of two Ni‘ihau school buildings.

Unfortunately, neither of these practices has been passed down to the current generation of Ni‘ihau residents, but another aspect of the culture, the Ni‘ihau shell lei, has not only been preserved, it has also been enhanced and has developed into a fine folk art unequalled anywhere in the world.

Much has been written about the fact that an entire island and its population has been under the control of a single family for nearly 150 years, but due to the policy of the owners—current ownership of the island is in the names of brothers Bruce and Keith Robinson, descendants of the original Sinclair family who purchased the island in 1864—access to the island has been limited, and this has resulted in the preservation of the Ni‘ihau language as well as a traditional lifestyle unlike anywhere else in Hawai‘i.

PHOTOS:
1)  Loading cattle from the beach on Ni‘ihau.
2)  Gilbert Pahulehua taught in this school building (photo donated to Kaua‘i Museum in 1962).